We’re not in Kansas (or Queens) Anymore. 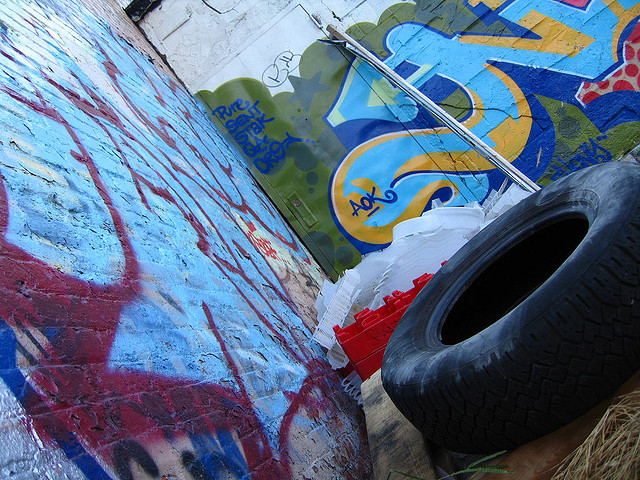 Outside my window stands a four-story brick building. Its presence is unforgiving; tagged with graffiti, the indistinguishable scribbles of black spray paint spread across the framework.

Large glass panes outline the loft spaces inside and smokers can be seen standing at them, conversing and flicking ashes that float down to the street. The billboard to the right of me stands high above the freeway and big block letters colored red spell out, “Me Love Rambo.”

Bags of garbage line the curb and litter is scattered throughout the neighborhood. Two cats live in the parking lot and sun themselves and roll around in the dirt. Patches and Midnight is what we have named them. They like to sleep under our car.

We have moved to Brooklyn. And this is our view.

It is much different from our life in Queens, with rubbish-free streets and the cacophony of chatter from moms in yoga pants drinking soy lattes while pushing strollers occupied with their fertility-forced twins.

In the entire year we lived there, there was not ONE single homeless person in the neighborhood. Not one. That is weird. It’s not that I am dying to be pestered by a dirty old man shaking an empty cup at me (or anything else for that matter) but this just doesn’t seem very New York to me. Even my neighborhood in Chicago had the bearded homeless lady who threw tampons at people.

I’ve been in need of some grit. I need the grit to spark some creativity back into me.  And grit we will have here in Williamsburg, Brooklyn. Besides the overall dirtiness of the streets, there are the entitled un-showered trust-fund kids in hoodies and flannels with those flesh-plug hole things in their ears.  These are the Williamsburg baristas that will be serving me my coffee. There are the uber-skinny boys wearing uber-skinny jeans with mismatched dye jobs and vintage Oleg Cassini jackets . They will be bringing me my breakfast bowl of quinoa, kale, almonds and halloumi cheese.

All with an attitude and all with tattoos. I have never seen so many people dipped in ink. Entire bodies covered up, leaving no traces of a previous life of plainness. We saw a guy on the subway yesterday that had just his entire left side tattooed. The Burrito said it reminded him of the Bon Jovi song “Livin’ on a Prayer,” because he was “halway there.” My bare arms and legs must look like a blank canvas that they would love to get their hands and crayons on.

The attitudes of the hipster waitstaff around here remind me of going on vacation and experiencing “Jamaican time.” They are never in a hurry to greet you or get you a drink or tell you about the specials with a smile on their face. It’s all about being cool and making sure you know that you are indeed, not cool. I might have a better chance of getting ice in my drink if I had a face filled with piercings. And poor Burrito. He actually had a guy take one look at him with his shirt and tie on and said, “There goes the neighborhood.”

Damn hipsters. It’s like we’ve gone back to High School again and instead of the jocks being miserable little pricks, it’s knit-hat-wearing, bone-marrow eating, inked up spoiled “starving” artists at the ready to bully anyone who’s not cool enough to ride a Fixie to the record store.

But, no worries. I am excited to be here. I have not been surrounded by this much creativity before. Yesterday on my run, I passed a girl who was working on a huge painting she had propped up against a building. She had cans of paint by her feet and she just worked on her piece alone in the blazing sun.  It was pretty awesome. I am taking in all the graffiti (and learning the different types) and the awful 80’s style that is forever prevalent and the garbage blowing down the streets and I am learning to embrace it.

This is the New York City experience I’ve been waiting for.  It’s Brooklyn, yo.