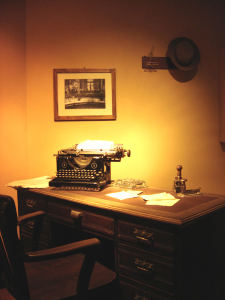 Things are getting ugly and it’s sort of a mess. I have awful writer’s block. And when I say block, it’s a complete brick wall in my face. I cannot seem to take Hemingway’s advice of writing one true sentence. Or, I get the sentence and can’t follow it up with anything behind it.

I’ve thoroughly confused myself in writing my own damn book. Why I decided to write a book about several characters and a storyline that switches from past to present every other chapter, I will never know.

At the same time, I really want to utilize my blog the way that blogs are intended. I want to be able to write something every couple of days to not only become a better writer, but also enjoy all the networking and fun of having a blog brings.

My book, The Lucid Nymph, is going to take time, of course. I am outlining it, and sort of starting over as the story has gotten so complex I don’t know what the hell I’m doing anymore. I’ve got to dissect every bit of it and re-think some of the story. Thankfully, I do already know the ending, which is keeping me from going over the edge.

In the meantime, I want to keep writing tidbits for the blog, but am searching for ideas. I’ve been looking at other blogs, doing searches for writers block and at the top of the list, just ignoring the whole situation.

When I first moved into the city, I joined a bunch of Writers Meet Up Groups. I’m sure you are familiar with Meet Ups. I thought I was going to meet a bunch of cool writers with good things to say. Instead, I attended three different meetings, all of which had really weird people in them. One woman, whose computer was covered in stickers (a Harry Potter type), told me to forget about ever getting published, that it just won’t happen. Her bitten-to-the-nubs fingernails covered in black nail polish added to her charming demeanor.

But…I know as a writer we get rejected over and over again and you just never know when something good might happen. So, I’m thinking of trying the groups again. Maybe I will find a person or two that is quasi-normal and can give advice and help with such things as writer’s block. The worst case scenario, I’ll have great stories about the weirdo’s I encounter there. In fact, count on a lot of those.